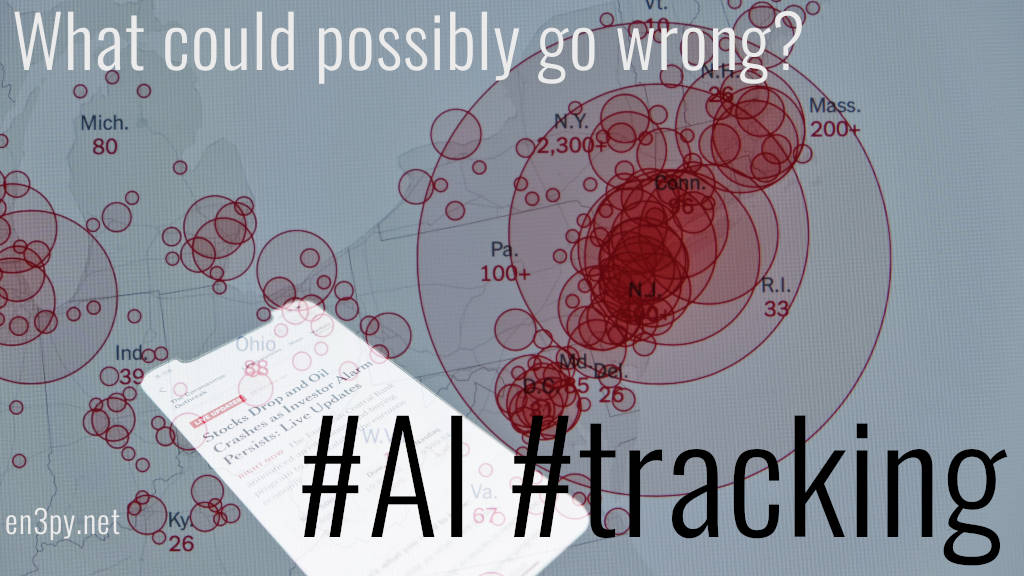 Photo by Brian McGowan on Unsplash

Disclaimer: this is a fictious story and, well, some experience. Shall not be considered a prediction (hopefully).

So, the World implemented anonymous, privacy proof applications for “diseases” tracking. Everything went well, massive amounts of data started flowing to datacentres around the world. AI algorithms started their learning processes to draw statistical charts and hotspots of the symptoms around the globe, tracking for possible contagions and points of interests for aggregations.

One day they powerful AI system mangling terabytes of data in some Amazon datacentre pointed out a hotspot in some residential area. Data suggested that these symptoms were compatible with a coronavirus epicentre that could quickly spread.

The AI driven intelligence issued an alert. Within 24 hours the area was sealed, tests were being initiated, and within 72 hours an operative camp has been set up. State of the art efficiency.

Except, in three days later, there was no evidence of any kind of contagion.

The event happened in a bigger city. Same behaviour.

Data scientists started analysing the algorithms, but the AI models were too complex to understand their correct working. Apparently, the data was correctly being evaluated and computed.

A man returned from the hospital to his residential seven store building. By a taxi. The very same taxi that took to the hospital a man from a hotel near the airport. He just returned from a trip from the other side of the world. An auditor in charge of verifying the efficiency of the “pandemic response procedures” built up after a major event that locked down the whole planet.

This man, this auditor, was an experienced man knowing very well the problem of epidemics, so he was not using the application. He was a veteran. What he didn’t know, was that on his airplane a woman has been infected by someone else in a rural area. She didn’t even have a smartphone, and she was sitting right behind him. She sneezed just once.

Meanwhile, the AI system kept kicking up cases around the world, in big cities and the media started digging into it. The AI system was showing signs of failure, petabytes of data needed to power the algorithms were being screened looking for the problem. The information hit the news.

And as it has become a custom, the news spread across the globe in a compulsive fashion.

Again, the world was in fear and anger.

A man was with his wife at the restaurant, one of the luxurious ones. He started coughing. Silence fell on the hall, while everyone was watching the man coughing intensively. Even his wife was staring, while the man’s face turned red. “Somebody call an ambulance”. Fear spread, someone stood, took his coat, put it on and quit the restaurant. Then another one, and another one.

The man was still coughing, fell on the floor. Someone did call an ambulance, saying the man “had symptoms of an intensive respiratory disease”.

The cough stopped before the ambulance arrived. A crew of paramedics arrived on place and took care of the man immediately. People were scared, some ran away from the place. The lead paramedic stood and looked around: “this man has suffocated because something fell in his throat… and nobody of you people even tried to do something to save his life…”

People stared unbelieving. Even the wife.

An alert rang on all the phones, simultaneously. The AI system triggered an alert in the area.

The paramedic’s trust has just been broken by a broken algorithm that issued a false positive alert. The health system’s reputation started falling apart.

The situation worsened in the meantime; governments couldn’t shut off the AI system because it was vital to preserve people’s life around the world.

Turned out it was just the tip of the iceberg.

Fake news advertised throughout powerful commercial algorithms in the areas spread fear and lack of trust in the system. People saw the news, read the comments from others confined in the “temporary quarantine confinement areas” that were built so efficiently in few hours.

Riots started inside and outside the confinement areas.

At last, they anonymous AI algorithm has been shut down, after a massive global expense in resources, technologies and electric power.

The AI anonymous statistical data has been exploited.

It has been exploited because where there’s “anonymity” there can’t be reliable information.

We fight compulsively for our “privacy” to avoid sending data to a public institution, but we send daily tons of data to private giants who use that information to sell us things we don’t need and spread more unreliable news.

What could possibly go wrong.

We had a choice. We made the only choice we saw: the one which would benefit ourselves as individuals. Not as a society.

In the meantime, the auditor has been hospitalized for a new disease that he was spreading not even knowing. He met hundreds of people during his work trip.

The world was again in chaos, many were living a dejavu. Politicians started accusing health organizations for their incompetence, protecting their stools and alleged reputation. Health organizations were struggling to fight the problem. IT companies were suggesting new even more powerful AI systems to help fighting the disease. Privacy activists were fighting to prevent “data misuse”.

Meanwhile, the man who returned from the hospital, died by a virus spreading.

Home, alone. After seeing his nephews who told him about the news. He stopped using the anonymous application after the scandals.

But perhaps, he would prefer seeing his nephews once more.